Commercialization the process of launching a new product; it may involve heavy promotion and filling the distribution networks with the product.

At last the product is ready to go. It has survived the development process and it is now on the way to commercial success (if all goes well, that is!). ‘ Commercialization ‘ is the process or cycle of introducing a new product or production method into the market. In this stage, the product is launched, advertisements and promotional activity begins and increases heavily, and the distribution pipeline is filled with the product. The actual launch of a new product is the final stage of new product development, and the one where the most money will have to be spent for advertising, sales promotion, and other marketing efforts.

Commercialization of a product will only take place, if the following three issues are satisfied:

The company has to decide on an action plan for introducing the product by implementing the above decisions. It has to develop a viable marketing-mix and create a respective marketing budget. When a plan is in place for each of these three issues, then the commercialization process may begin. 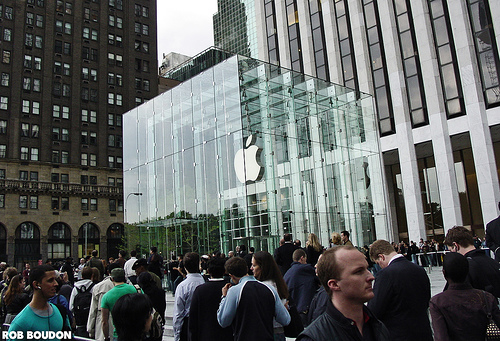 Launching a New Product: Whenever Apple launches a new product, there are crowds outside waiting to get their hands on the new product.

Marketers must learn from their own previous failures, and others’ failures, to ensure that they are successful for the next product launch.

Describe how market structure and business model, culture and communication, political and regulatory, and product/service factors impact a company’s market success and failure

A product fails when it does not meet the objectives that were established before its release. The following case study describes Wal-Mart’s failure to enter the German market, and highlights many of the problems faced by marketers in making a successful product. By learning from the failures of others (and their own prior failures), marketers may learn how to succeed in future. For a summary of the reasons why products fail as applied to the Wal-Mart case.

Wal-Mart’s Failure in Germany: Marketers face many challenges when making and introducing a successful product.

Wal-Mart is the world’s biggest food retailer. In some nations, it is a great success. However, it has failed in some countries (e.g. Germany, South Korea). Here, we will describe Wal-Mart’s failure in Germany, and use its experiences there to illustrate some key principles relating to product failure and deletion.

There is fierce competition in the German grocery industry, and thus, low profitability in the food retail sector; profit margins range from 0.5-1%. The main feature of Wal-Mart’s business model is to continuously cut costs and so offer lower prices than its competitors. Wal-Mart also continuously pressures its suppliers to cut costs.

In 1997-1998, Wal-Mart acquired over 95 stores from existing German supermarket chains, making it the fourth biggest supermarket operator in Germany. The objective was to expand to 500 stores. However, Wal-Mart never grew from the original 95 stores. By 2007, it was bought out by one of Germany’s largest retail groups. Ultimately, Wal-Mart left the German market with a loss of one billion dollars before tax.

There are four key issues related to Wal-Mart’s failure in Germany: (a) market structure and business model; (b) cultural and communication; (c) politics and regulation; and (d) product/service failure.

A retailer that wants to follow Wal-Mart’s strategy of low prices needs to expand rapidly. In Germany, there were not enough appropriate locations to support such expansion. Wal-Mart did not build their own stores, but took over existing supermarkets that had a completely different business model – they were very small and had a limited range of goods. They were also located far apart, which resulted in high logistical costs.

With their strategy of “everyday low prices,” Wal-Mart is very successful in the United States and elsewhere. However, due to the extreme competition, Germans are accustomed to the low prices that are offered by numerous discount supermarket chains. For this reason, Wal-Mart’s low price strategy did not create sufficient competitive advantage.

When products are introduced, it is important to consider cultural factors. Wal-Mart decided to operate its German locations from the UK. Thus, its “corporate language” was English. However, many of the older German Wal-Mart managers did not speak English. Some managers did not stay on after the Wal-Mart acquisition. Key business connections were lost, which resulted in the loss of major suppliers. It would have been far better to retain and communicate effectively with the German managers who had know-how about the local market.

Wal-Mart’s managers violated German laws repeatedly, simply because they were unfamiliar to them. For example, Wal-Mart always stays union-free, but Germany has a history of strong, politically powerful unions. Ver.di, one of Germany’s biggest unions, sued the company for failing to publish key financial statements in 1999 and 2000. A fine, as well as much negative press, harmed Wal-Mart’s reputation.

After its expansion strategy failed, Wal-Mart began a price war to drive small competitors out of business. One part of the price war was to introduce a private label called “Smart Brand” and sell most of these products below manufacturing costs. The reaction of many competitors was also to decrease their prices, which led to a profit setback for the entire industry. Finally, the Federal Cartel Office interceded and stopped the price war.

Good customer service, combined with low prices, could have been a new market niche in Germany. One part of Wal-Mart’s customer service program was to ensure someone was always there to help. However, customer reaction was negative, because customers who normally do their grocery shopping in discount supermarket chains are used to self-service. They found this annoying, and it did not create a reputation for providing good customer service.

Wal-Mart tried to apply its U.S. success formula in an unmodified manner to the German market. As a result, they didn’t have sufficient knowledge about the market structure and key cultural / political issues. In addition, structural factors prevented Wal-Mart from fully implementing its successful business model. The final outcome was that it had to abandon its offerings in Germany. Had Wal-Mart paid careful attention to these issues prior to entering the German market, it could have had a very different outcome.