A demand curve is a graph showing the relationship between the price of a certain item and what consumers are willing to buy at the price.

When clients want a product and are willing to pay for it, we say that there is a demand for the specific product. There has to be a demand for a product before a manufacturer can sell it. Demand does not only have to do with the need to have a product or a service, but also with the willingness and ability to buy it at the price charged for it.

Andrew and his mother, Mrs. Jeffries, decided to earn extra money by selling grape jam at the local craft market. Mrs. Jeffries would buy the ingredients and make the jam. Andrew would help his mother seal it in jars and they planned to sell it at the market on Saturday mornings.

Before starting to boil the jam, they decided to test the market to see whether people would be interested in buying their product. Mrs. Jeffries therefore boiled a few jars of jam and asked their friends and family if they were interested in buying it and how much they would be willing to pay for it. Everyone was encouraged to taste some of the jam before making a decision.

The results Mrs. Jeffries received is are illustrated in the graph which indicates the demand at different prices. 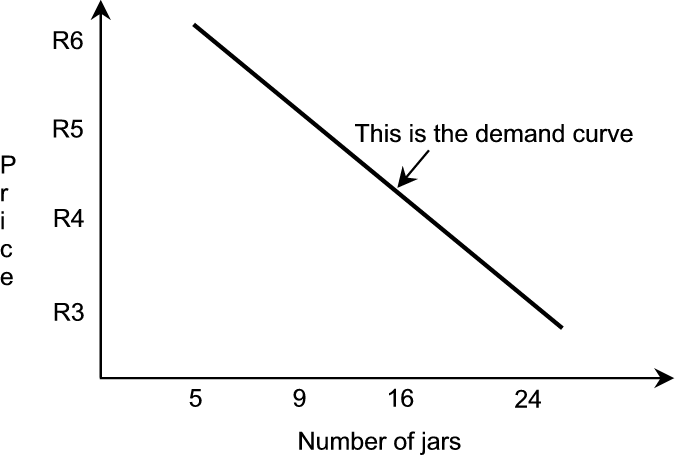 Demand Curve: This graph shows the demand curve based on the number of jars and the price.

The line on the graph indicates the way in which the change in price brought about a change in demand. This is referred to as the demand curve. It specifies the amount of a product according to the demands for it at a specific price.

In economics, the demand curve is the graph depicting the relationship between the price of a certain commodity (in this case Andrew’s jam) and the amount of it that consumers are willing and able to purchase at that given price. It is a graphic representation of a demand schedule.

According to convention, the demand curve is drawn with price on the vertical axis and quantity on the horizontal axis. The demand curve usually slopes downwards from left to right; that is, it has a negative association (two theoretical exceptions, Veblen good and Giffen good). The negative slope is often referred to as the “law of demand”, which means people will buy more of a service, product, or resource as its price falls.

The demand curve is often graphed as a straight line in the form Q = a – bP where “a” and “b” are parameters. The constant “a” “embodies” the effects of all factors, other than price, that affect demand.

If income were to change, for example, the effect of the change would be represented by a change in the value of “a” and be reflected graphically as a shift on the demand curve. The constant “b” is the slope of the demand curve and shows how the price of the good affects the quantity demanded.

Shift of a Demand Curve

The shift of a demand curve takes place when there is a change in any non-price determinant of demand, resulting in a new demand curve.

Non-price determinants of demand are those things that cause demand to change even if prices remain the same—in other words, changes that might cause a consumer to buy more or less of a good even if the good’s price remained unchanged.

Some of the more important factors are:

However, demand is the willingness and ability of a consumer to purchase a good under the prevailing circumstances. Thus, any circumstance that affects the consumer’s willingness or ability to buy the good or service in question can be a non-price determinant of demand. For example, weather could effect the demand for beer at a baseball game.