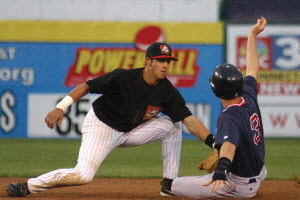 In 2000, the club was sold to a group of investors headed by a local attorney, Coleman Levy, and William Dowling, a former New York Yankees executive vice president. Dowling is the president and CEO of the club, and Levy is the vice president. With a substantially new front office and new increased promotions, the club saw every attendance record fall, passing the 300,000 mark for the past 3 years.

The Rock Cats see themselves as selling affordable family entertainment, not baseball. They target women and children. They integrated the Internet into their marketing activities three years ago and have found it very useful for selling tickets. They also have a Facebook and Twitter presence. About 3 years ago, they spent $5,000 for a professionally prepared marketing research report. As Dowling commented, “It made the company more sophisticated.”

The marketing planning process is relatively informal, with everyone participating. There is no formal document. Dowling’s philosophy is that if something costs less than $1,000, “go do it.” If it costs more than $1,000, “justify it.” The Rock Cats are run out of a small office in New Britain. The communication among the staff is regular and effective. Here is an instance in which a formal marketing plan does not seem necessary. Whatever they are doing, it is working just fine.William Dowling (Rock Cats president and CEO), personal interview, March 15, 2011; “Rock Cats History,” Minor League Baseball, accessed December 2, 2011, web.minorleaguebaseball.com/team5/page.jsp?ymd=20100316&content_id =8806396&vkey=team5_t538&fext=.jsp&sid=t538; “New Britain Rock Cats,” Wikipedia, accessed December 2, 2011, en.wikipedia.org/wiki/New_Britain_Rock_Cats.

A fun look at what the Rock Cats offer to fans.