The WTO was formed in 1995 and has 157 member countries working together to supervise and liberalize international trade.

Review the purpose and status of the World Trade Organization (WTO)

The World Trade Organization (WTO) was officially formed on January 1, 1995 under the Marrakesh Agreement, with the goal of supervising and liberalizing international trade between participating countries. The WTO provides a framework for negotiating and formalizing trade agreements, and a dispute resolution process aimed at enforcing participants’ adherence to WTO agreements signed by representatives of member governments. The organization is attempting to complete negotiations on the Doha Development Round, which was launched in 2001 with an explicit focus on addressing the needs of developing countries. As of June 2012, the future of the Doha Round remains uncertain. 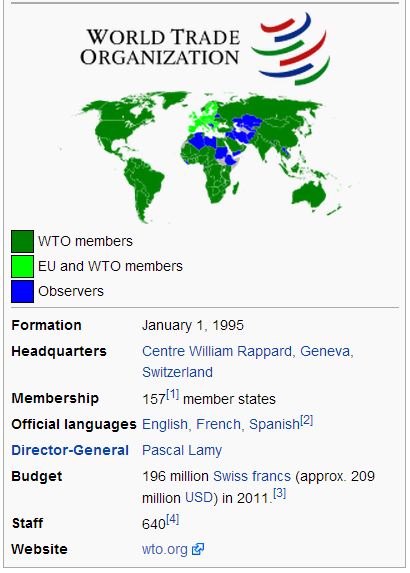 World Trade Organization: The WTO has managed international trade negotiations among its members since 1995.

The General Agreement on Tariffs and Trade (GATT) was established after World War II in the wake of other new multilateral institutions dedicated to international economic cooperation Well before GATT’s 40th anniversary, its members concluded that the GATT system was straining to adapt to a new globalizing world economy. As a result, the WTO was formed in the final Uruguay Round of GATT in 1994. The WTO has supervision over the GATT treaties as well as 60 other agreements made during the Marrakesh Agreement.

The most important functions of the WTO are as follows:

The WTO has 157 members and 27 observer governments. WTO members do not have to be full sovereign nation-members. Instead, they must be a customs territory with full autonomy in the conduct of their external commercial relations. Iran is the biggest economy outside the WTO. Most observers must start accession negotiations within five years of becoming observers. Fourteen states and two territories so far have no official interaction with the WTO.

The Doha Development Round

The Doha negotiations round was to be an ambitious effort to make globalization more inclusive and to help the world’s poor, particularly by slashing barriers and subsidies in farming. The initial agenda comprised both further trade liberalization and new rule-making, underpinned by commitments to strengthen substantial assistance to developing countries. According to a European Union statement, “The 2008 ministerial meeting broke down over a disagreement between exporters of agricultural bulk commodities and countries with large numbers of subsistence farmers on the precise terms of a ‘special safeguard measure ‘ to protect farmers from surges in imports. ” The position of the European Commission is that “The successful conclusion of the Doha negotiations would confirm the central role of multilateral liberalization and rule-making. It would confirm the WTO as a powerful shield against protectionist backsliding. ” An impasse remains and as of June 2012, agreement has not been reached, despite intense negotiations at several ministerial conferences and at other sessions.

The conflict between free trade on industrial goods and services, but retention of protectionism on farm subsidies to the domestic agricultural sector (requested by developed countries) and the substantiation of the international liberalization of fair trade on agricultural products (requested by developing countries) remain the major obstacles. These points of contention have hindered any progress to launch new WTO negotiations beyond the Doha Development Round.

The WTO oversees about 60 different agreements which have the status of international legal texts. Some of the most important agreements are as follows: