Value is the worth of goods, and relative value is attractiveness measured in terms of utility of one good relative to another.

Often a measure for the worth of goods and services is units of currency such as the US Dollar. But, unlike the units of measurements in Physics such as seconds for time, there exists no absolute basis for standardizing the units for value.

One of the most complicated and most often misunderstood parts of economy is the concept of value. One of the big problems is the large number of different types of values that seem to exist, such as exchange value, surplus value, and use value.

The discussion of values all start with one simple question: What is something worth?

Today’s most common answer is one of those answers that are so deceptively simple that it seems obvious when you know it. But then remember that it took economists more than a hundred years to figure it out: something is worth whatever you think it is worth.

This statement needs some explanation. Take as an example two companies that are thinking of buying a new copying machine. One company does not think they will use a copying machine that much, but the other knows it will copy a lot of papers. This second company will be prepared to pay more for a copying machine than the first one. They find a greater utility in the object.

The companies also have a choice of models. The first company knows that many of the papers will need to be copied on both sides. The second company knows that very few of the papers it copies will need double- sided copying. Of course, the second company will not pay much more for this feature, while the first company will. In this example, we see that a buyer will be prepared to pay more for the increase in utility compared to alternative products.

But how does the seller value things? Well, in pretty much the same way. Of course, most sellers today do not intend to use the object he sells himself. The utility for the seller is not as an object of usage, but as a source of income. And here again it is marginal utility that comes in. For what price can you sell the object? If you put in some more work, can you get a higher price?

Here we also get into the utility for resellers. Somebody who deals in trading will look at an object, and the utility for him is to be able to sell it again. How much work will it take, and what margins are possible?

Not only do the two different buyers have a different value on an object, the salesman puts his value on it, and the original manufacturer may have put yet another value on it. The value depends on the person who does the valuation–it is subjective.

Relative value in the marketing context is attractiveness measured in terms of utility of one product relative to another.

In term of pricing, prices of valued items undergo questionable fluctuations. For example, even though housing provides the same utility to the individual over time, and supply and demand are relatively constant and stable, the relative price of housing fluctuates, even more so than with stocks, oil, and gold.

This price volatility appears to occur in cycles and is caused by a myriad of factors. Figure 1 is an attempt to overlay the prices of housing, stocks, oil, and gold by normalizing the price streams. Normalizing is achieved by applying a discounting formula which converts a price to the price it would be at a certain date, given a certain discount rate. This would normally be used to cancel the effects of inflation, in which case the inflation rate would be used. 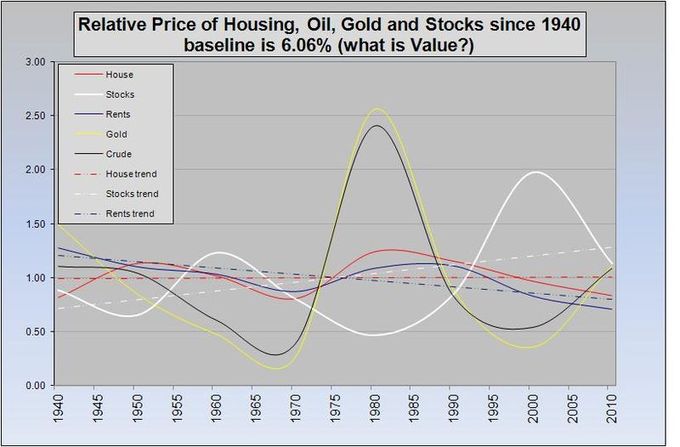 Value or Price: This chart shows that commonly valued items of constant utility tend to vary in price over time.